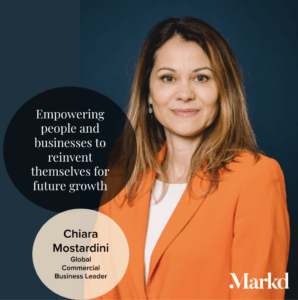 Chiara Mostardini is currently the Global Customer and eCommerce lead at Nestlé based in Switzerland. She’s one of the brave. A halftime leader who wants to make an even bigger impact in her world.

Born in a village in Tuscany, she has lived and worked in more European cities than could ever be stamped on one passport.

“From a very early age, I had this curiosity about the world, a sense of adventure that I couldn’t contain,” says Chiara.

As soon as she could travel, Chiara moved to Florence then Milan. In Milan, she established a consulting career at Accenture supporting a diverse range of companies, which required lots of travel. But after five years, she made the courageous decision to move to San Pellegrino in a sales role, the first female in a team of 50 male staff.

“It was a complex and challenging environment but I rolled up my sleeves and got the job done. It was with a great sense of achievement that I was recognised as the best sales leader in the organisation. I did not let my gender limit me and in fact, I inspired other women to follow my path.”

Chiara wanted to challenge herself even further to grow her skills and experience as a commercial leader. Her next destination was Paris where she spent six years at the Nestlé Waters business before securing a promotion to work in Frankfurt as a Director. However, she says the highlight of her career is her current role in Vevey, Switzerland.

“Being the global eCommerce lead for the world’s largest food and beverage company has been hugely rewarding. Here I’ve worked with amazing leaders to help shape one of the company’s most important strategic pillars. In this role, I’ve been able to design, pilot, and deploy the global eCommerce strategy in record time.”

We look at Chiara and think how did a village girl from Tuscany grow to be a global commercial leader in one of the world’s largest companies? She says the keys to her success have been her values which have propelled her forward and given her the ability to adapt to many different scenarios whether it be new industries, companies, countries, roles, categories, stakeholders, and life experiences. Asked how this applies to businesses, particularly with her work in eCommerce, she makes the following thought-provoking statement.

“Every business needs to think about a future where 50% or more of their sales will be made online. This requires an evolution of existing business models especially those heavily reliant on bricks and mortar. COVID has accelerated this thinking for many companies, and I believe those that will succeed are leading their customers online or at least following them at a rapid pace. It all comes down to being able to reinvent yourself.”

What does Chiara’s next half look like? Empowering people and businesses to reinvent themselves for future growth. As one of the world’s leading commercial thinkers, this is how she plans to give back in her next half which promises to be the best half of all.

To learn from Chiara Mostardini and how to reinvent your business through eCommerce follow her on LinkedIn here.

If you’re a leader at halftime and think you’d benefit from a personal or professional brand experience like Chiara, say hello@markdglobal.com.au