Dr. Dean Jarrett: Pioneering a pathway for others to follow 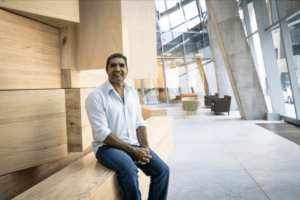 As we celebrate NAIDOC week, which aims to raise awareness of the status of Aboriginal and Torres Islander Australians, we wanted to share one man’s story. Dean Jarrett was a family friend of Jodi Castellan in our team. Unfortunately, his life was cut short only weeks ago.

“To me, he represents one of the best examples I know of values-driven leadership. He educated himself to have the biggest impact on his community. His passing away is so sudden and unfortunate but it doesn’t mean his legacy can’t live on.”

Dean Jarrett was a Gumbaynggirr man, originally from Nambucca and the first Indigenous person to earn a Ph.D. from the University of Technology Sydney (UTS) Business School. While proud of his achievements, Dean believed he was setting a pathway for many others to follow.

“I am hoping to be the first of many,” he once said. “There’s a pathway there now.”

When you look at Dean’s life, you see that from the very beginning he was a community leader devoted to improving the social and economic conditions of Indigenous Australians. This led to working with industry bodies, community leaders, and employers to overcome barriers to Indigenous entrepreneurship, employment, and enterprise.

In 2009 he started his first consulting business, which set out to help level the playing field for Indigenous Australians in the corporate world.

However, it was at a 2012 conference in the US focused on minority business inclusion that Dean had a lightbulb moment.  Everyone recognised that a qualified and inclusive workforce that was representative of its society led to improved business performance. Yet even at the conference Native American people and businesses were completely underrepresented in forums where they needed to be present to drive change.

He came back to Australia recognising that Indigenous Australians were in the same boat. Dean felt a great divide between the Australian corporate sector and the community he loved and believed in. How could he close the gap for mutual benefit?

It was then he decided to take on a Ph.D. at UTS in Indigenous Entrepreneurship, Management and Supply Diversity. As part of his research, he was awarded the 2015 Indigenous Fullbright Scholarship which saw him spend almost 12 months at the University of Arizona. Here he worked alongside Native American academics and business owners to find effective ways to build partnerships between Indigenous businesses and their corporate and government buyers.

“What his research highlighted is the role trust plays in bridging the gap,” Jodi says. “We talk about values and trust in building successful businesses at Markd Global. This was confirmed in Dean’s research and something we can all learn from Indigenous culture and enterprise.”

The essence of Dean’s research highlighted that the values of Indigenous business leaders were driven less by the financial gain of individuals. Their primary focus was creating employment, mentoring, and giving back to the community. If leaders from diverse backgrounds could connect at this level, then powerful cross-cultural business partnerships could be established.

Dr. Dean Jarrett’s story, message, and life touch on topics that are relevant to every Australian. He was a man that stepped up to the mark creating pathways for others to follow. His story is relevant whether you’re a young Indigenous person wanting to make a difference in your community through business or education. It is relevant for Indigenous business leaders who want to build on his legacy through more effective partnerships with corporate Australia. It is relevant for corporate Australia to follow a values-driven leadership path to make way for a more inclusive business landscape and society.

To find out more about Dr. Dean Jarrett, link to his profile here.

Then please share this post with anyone that would benefit from reading it. More than anything Jodi and our team want his wonderful legacy to live on.