By Sibon Schouten August 3, 2021 No Comments 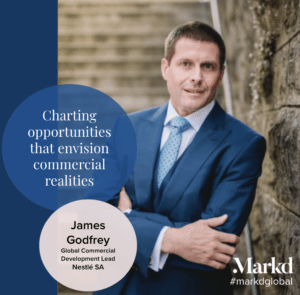 “What’s next? This is the challenge I put to the Nestlé Commercial Development Team. How are you facing your fears based on an unknown future?”

This is James Godfrey talking about a subject you don’t often hear raised in leadership forums. As Global Commercial Development Lead at Nestlé based in Switzerland, he thinks it’s one of the biggest limitations to innovation and growth.

“We fear failure, we fear the future, we fear COVID, we fear doing things differently, we fear sharing knowledge, we fear being unprepared for a new or next normal,” he adds.

Does that mean we shouldn’t fear at all? Isn’t fear part of our human makeup and how we preserve ourselves in leadership, business and life? Especially in a world that has been turned upside down by a tiny enemy, we can’t even see.

But there is some truth to what James is saying. At Markd Global, we’ve had the privilege of working with a number of leaders who want to make a more meaningful mark in the world, personally, professionally, and corporately.

There’s a sense that leadership is changing in the business landscape. The old world required hierarchy to achieve predictable outcomes based on control, compliance, and conformity. All that was expected of an employee was to follow the rules which meant being directed by the manager above them.

Fast forward to 2021. That’s not the world we live in anymore. We are faced with unpredictable events where control is impossible, almost damaging. It requires a different kind of leader driven by values that are more aligned to innovation, knowledge, courage, energy, and diversity. These leaders inspire employees to be self-directed to thrive in hybrid and networked structures to enable businesses to grow.

For us, James Godfrey is an example of this new kind of leader. We want to learn from him. So, we ask him to share his story. How did he come to have this sense of conviction that almost seems counter-intuitive to what everyone else is feeling?

“I grew up on the Northern Beaches of Sydney in what was an almost idyllic childhood surrounded by sun, sand, sea, and the outdoors. Leadership is something I drew inspiration from early in my life in the form of sports coaches and other community leaders. I remember feeling like I could do anything as a teen and was recognised with a number of leadership awards.”

But there’s more to James’ story. And to understand more, we take him through the brand archetypes exercise. We discover why he is so hard to pin down. He’s as divergent as the lead characters in the science-fiction movie of the same name!

It makes sense as his values align to three primary archetypes – the Explorer, the Sage, and the Creator. James shows up in his Explorer mode when he tells us that he couldn’t wait to leave the safety net of his Sydney upbringing to travel throughout Europe and have an adventure as an 18-year-old. Mind you this adventure includes sailing competitively and then diving into the ocean to life-threatening depths to explore the wonders that few ever get to see. We wonder if his mum knew what she was signing up for.

As a Sage, he tells us of studying both formally and informally a broad range of topics to connect dots that would help him understand the world better and then using this knowledge to share with others. And then finally as a Creator, he shares his passion to be around new ideas, developing, and problem-solving them because this is the source of our future reality.

All this adds up to a leader who has a vision for the future, the intelligence to chart the way, and the ability to problem-solve with others to get there. It is this unique combination of skills that has helped James navigate a commercial career that has seen him rise to the top of his field in the world’s largest food and beverage company.

“I suppose I was never one you could put in a box. I’ve always had a bigger idea of the sales and commercial function not just delivering short-term results but working towards a longer-term vision. If there’s been one thing I’ve been good at is aligning stakeholders to that vision.”

It’s easy to see that James’ skills, experience, passion, and purpose have come together in his current role. He is working with the next generation of commercial leaders inspiring and nurturing them to deliver today while creating tomorrow. So we turn James’ opening challenge on himself. What’s next for him? What does his future look like with less fear?

“I’m human and I feel fear like everyone else. I liken it to deep-sea diving. You don’t know what you will encounter in the deepest parts of the ocean but you know the opportunity is there to discover something new. In terms of what’s next for me, I want to chart a future that envisions new commercial realities. Imagine what could happen if you brought together One Million Future Thinkers to solve the challenges that are facing the business world today. That has to be the most exciting thing that could happen in my next half,” he smiles.

It feels big and bold but what else would you expect from a leader like James. It’s an incredible opportunity for Nestlé and for the business community at large to benefit from a leader who thinks like him. And more importantly for James to undertake a new adventure with a greater sense of purpose in his next half.

To find out more about James Godfrey and his One Million Future Thinkers initiative, link in with him here

If you’re a leader at halftime and think you’d benefit from a professional brand experience like James, say hello@markdglobal.com.au